Celebrating the life of our sweet boy, Skeletor

After a few months battling kidney failure, our sweet boy, Skeletor ended his journey in a very peaceful and beautiful way. We had been struggling to get him to eat for months. In the past couple of weeks, it was getting worse. His water intake had gone town too. His legs were weak. He was wobbly. He had gone from 1-2 meals a day to less than 1. The night before, I fed him some chicken, rice, and yogurt. The next morning, the carpet next to his bed was covered with rice. I knew that it was time to help him move on.

I gave him some nice pets and encouraged our nearly 4 year old son Conrad to do the same. I emailed his vet, Dr. Erdman, then cleaned up the mess and grumpily made my way to work, dropping Conrad off at daycare on the way.

Shortly after I got to the office, I called the vet to get info and schedule his Euthanasia. After texting the options and details to Melanie, I broke down in tears and could barely speak to her when the phone rang. She suggested that I leave work and come home to spend some time with him. I didn't hesitate.

Sobbing the whole way home, I pulled up while talking on the phone with my mom. She suggested I spend some quality time with Skeletor, taking him for a walk and letting him do the things he most enjoyed. This was great advice!

I offered him some chicken, which he wasn't interested in. I took Skeletor outside to the front yard. I set up some shade and put his bed near the grass with some water. He was enjoying the smells and the sunshine. 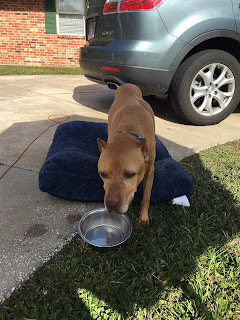 I put Genevieve (our 7 month old daughter) in her stroller and we went for a short walk. Skelly seemed happy to be outside, but walked so slowly, I didn't want make him go too far. We returned to our yard, and I gave him some more water. He had a drink and relaxed on the grass for a while. I brought out the chicken he refused earlier. He wagged his tail and ate some. 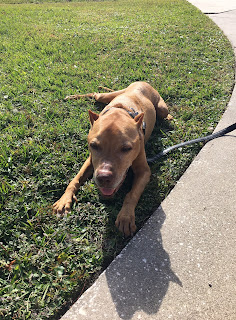 One of the hardest parts about this whole ordeal has been his unwavering spirit. Despite all of the signs and symptoms of illness, he maintained his loving personality. No matter how weak, he would always force himself up and walk over to me for pets. Regardless of whatever his previous owners (captors / monsters) did to him, he retained the capacity for an overabundance of love for people. For me, especially. This made the decision to help him move on that much more difficult.

After hanging outside for a bit, we decided to go in for lunch. I set up Skelly's bed in the dining room so he could relax with us as we ate. I was far from hungry, but managed to eat. 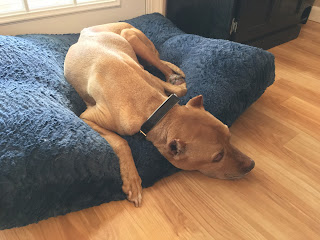 The clock was moving so quickly toward his 2:30 appointment. He received continuous hugs, pets, and love from his family. My brother Ian was planning to meet us at the Vet's office.

Wherever we went, I brought Skeletor's bed along so he could relax right there beside us.

Melanie and I were trying to decide what was best for his final arrangements. There were communal and private cremation services available, neither of which sounded appealing to me. I didn't like the idea of his body being incinerated with other animals. I didn't like the idea of sending him for a private cremation and then waiting to get his ashes back before having a ceremony. (What would we tell Conrad in the meantime?)

We were very concerned about how to break the news to our son Conrad. We didn't want to lie to him. We had given him a primer, talking to him about how sick Skelly was, and telling him that we need to give him lots of lovin' because he may not be alive for much longer. This was to be Conrad's first experience with death. We had read about the experiences of others, and determined that we should not make it confusing for him. I didn't want him to hear the words "put to sleep." I didn't want him confusing bed time with death. I didn't want him to think that any day he goes to school, he may return home to find that he has lost a family member.

I was overcome with grief, and felt like I was having a hard time making any type of decisions. I felt like burying him in our yard was the best thing. This was his home. These were his people. There's nowhere in the world he would rather be laid to rest. Melanie supported my decision, but said she couldn't help me and was worried about me burying him by myself.

At 2:15, it was time to go. Tears were flowing as I loaded his bed into the back of my car. I walked him out to the car, picked up my dear sweet boy, and placed him on his bed. I thought about the many car rides we took, more of them to the vet than to the beach. I would have liked it if he could have enjoyed some of the things I saw other dogs enjoying, but he's always been perfectly happy just being with the people he loves. He would take a hug and some scratches from his people over a playdate with another dog any day.

We arrived and met Ian in the parking lot. I asked if he had to go back to work. He said no, and that he could help me with the burial. We walked Skeletor up to the front door. He did his usual routine of checking his messages (ie sniffing and then peeing on the sidewalk.)

Dr. Erdman's staff were very gracious as they immediately lead us to a comfortable room with a soft blanket on the floor. I sat down with my dear sweet boy's head in my lap. We all gave him lots of gentle pets and words of encouragement and praise.

Dr. Erdman assured us that we did everything we could for Skeletor. He said that it's better to be a day early than a day late for something like this, which was definitely helpful for me to hear. He explained that Skeletor would receive a shot of a sedative. This would make him get very sleepy. After giving us a few minutes with him, they would return and give him a second shot, which would stop his heart. They assured us that beyond the initial pin prick, he would not feel any discomfort.

He was startled by the first shot, but quickly calmed down. I showered him with pets and listened to his breathing. I looked in his eyes. He seemed to be very comfortable. I think he was very happy to be with his people, whom he loved more than anything. I felt tremendous sorrow and tremendous love at the same time. I thought about what this must be like from his perspective. It seemed to me that this was the perfect way to go. His breathing was fast at first, and gradually slowed and slowed. He was completely relaxed. He was completely at peace.

Dr. Erdman returned with the second injection. We lifted Skeletor to the table. They pressed his paw into a piece of clay to make us a keepsake. We wrapped him in a blanket. My brother carried him out to his truck.

We returned to our house and found a good place for a grave. We dug and dug, sharing memories of Skeletor's strength, courage, and personality. When the grave was ready, I went in and asked Melanie if she wanted to join us. She came outside with Genevieve in her arms.

I told Ian that I wanted to carry Skeletor from the truck. We walked over and I lifted him up. He was wrapped in a blanket. He felt heavier than usual. I took each step with deliberation. Taking in the catharsis of this last moment together. I arrived at the gravesite, thinking I would be able to utter some kind of meaningful words before lowering him in. I was able to half muster the word "bye" before choking up.

I bent down and as gently as possible, placed my sweet friend into his final resting place. In the very yard he spent his time running around and barking at the neighbor's dogs. Three feet from the house where he spent his time with the people he loved. He was home.

A short while later, Melanie returned from picking up Conrad. We told him about how Skeletor was very sick. We told him that there was no medicine that could make him better, so we took him to the pet doctor who helped him die peacefully. We explained that this is the only way we could help him not feel sick anymore. Conrad was upset for a short while. Fortunately, it seems he's a little too young to be hugely impacted by this kind of loss.

We asked Conrad if he wanted to go say a few words and put some flowers on Skeletor's grave. We went out back to the burial mound, and hammered in the cross Ian made for him. Conrad placed flowers and asked a few questions. I spoke a little about Skeletor's strength and love. I commended Skeletor on how he never stopped wagging his tail. Every day we shared together, no matter how sick he was, he would always manage to light up for his friends and family. This was a testament to the love and adoration he held for us, which we are extremely grateful for. We love you, Skeletor! 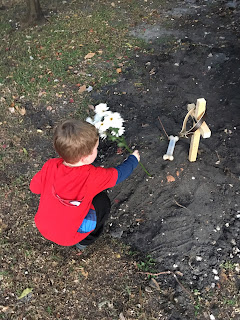 Rest in peace my dear friend. You were with me for 6 of the most important years of my life. With you at my side, I married my beloved wife, we were blessed with two beautiful children, and I grew into a much stronger, more compassionate, appreciative, and supportive man. 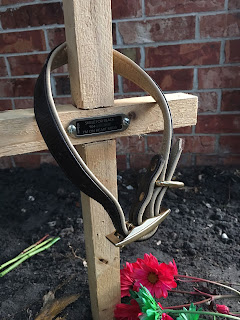 Thank you for choosing me, Skeletor.

Rescuing you was the best thing that could have happened to me. It was an incredible journey that showed me the true power of love. Love from you, a neglected puppy. Love from the world, as people from all over provided words of encouragement and donations to help us get you the heartworm treatment you needed. Love from me, more love than I knew I was capable of. 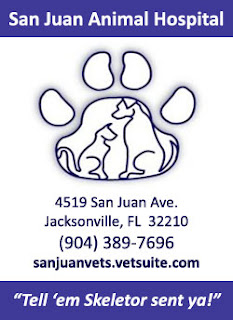 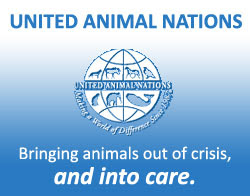 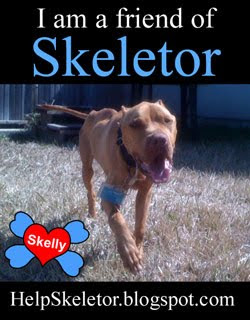 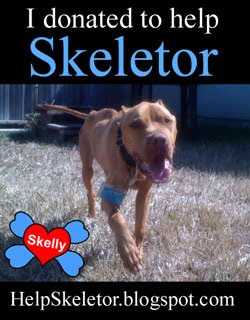 Please let us know if you link to Skelly's page. We'll try and return the favor :)